We had an Open House yesterday at the Priory, look who came! Bella the budgie accompanied by her ‘person’, a friend of a congregation member. All those present were completely charmed and a good time was had by all, especially me. The little bird tweeted and chattered on my shoulder, nibbled daintily on cheese biscuits and at one point rummaged around in my ear! She had come because she had injured her right foot and needed some extra TLC. Although the turn out for the event was not huge it provided an opportunity for friends and relatives to meet a priest, eat and see what a Zen Buddhist Priory looks like. 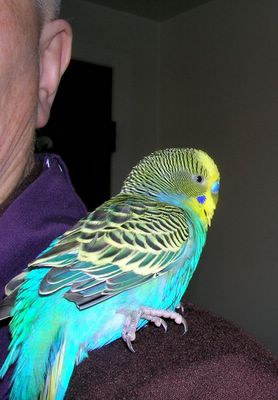 Being around Bella the song Jake the Peg by Rolf Harris kept running through my mind. I thought it was about somebody with a wooden leg, when on checking it out, it was an extra leg. Oh well no matter, it’s a catchy song all the same. Incidentally, Rolf Harris was working in Vancouver in the 1960’s when the inspiration for Jake the Peg came to him via a singing Dutchman. The last verse has Jake being ordered to put his best foot forward, but which one? Although off balance, little Bella was able to make her way up my arm using one and a half feet, and her beak.

But what I really wanted to write about was…. While waiting my turn at our bank on Whyte Avenue I noticed I’d become impatient. Knowing how impatience leads to frustration – which leads to habitual thinking patterns, I consciously connected with the ground. Standard mindfully practice advice is to bring ones attention to the here and now. Bringing ones awareness to where the body touches the ground aids this. Currently mindfulness practice, coupled with a new-found knowledge of posture habits, has me particularly aware of my feet. That’s having weight evenly distributed between both feet. Still waiting at the bank, now in more reflective mood, I glanced about. Every single person doing business with the cashiers, bar one, was weighted on one leg! Incredibly, so were the majority of people who were still waiting their turn!

Sadly, on Saturday, an older member of the congregation fell on ice over in BC and broke his leg in two places. We wish him well and a speedy recovery. From personal experience I know how very painful a broken bone can be. For me it also proved to be a gift. I’d smile wryly to myself and think, “Well, I have no choice but to take it easy now”. I hope being off his feet will similarly come to be known as a gift. And for Bella and the waiting crowds at banks and in check-out lines everywhere; “Best foot forward! And having them both on the ground makes it that much easier to choose which one to move first”!

One thought on “Best Foot Forward”