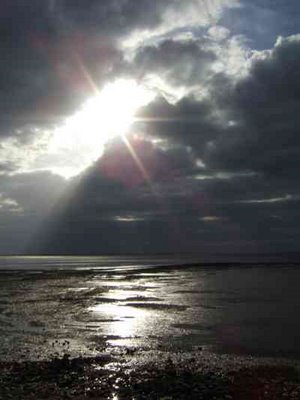 Received an email with news from an Edmonton Priory member driving the seven hours from Edmonton to Fort Saint John in October…”Going up the sky was cloudy with what appeared to be the beginnings of a storm. The interplay of light and dark and refracted color made the sky appear positively biblical. ” This photo was taken closer to home, near Lancaster. Thanks to the reader who sent the file this afternoon. Very uplifting photograph, especially helpful since I’m traveling, briefly, through cape disappointment. It happens.

Of course Cape Disappointment is an actual place at the mouth of the great Columbia River. I’m not sure why Lewis and Clark named it thus, perhaps because they were expecting something and when they got to the end of the trail, it wasn’t there. Expectations can lead to disappointment, for sure.