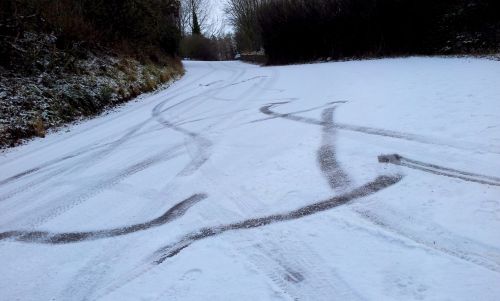 In answer to an anonymous comment from a few days ago. When ever possible I get out after breakfast and walk. I’m fortunate to be able to do that. It might just be for half an hour however it seems significant to physically separate from where I work and live. If but briefly. I’m not sure why that getting-out-of-the-house is important however doing it does seems to bring a certain liveliness to my working day. Some days I have to lever myself out of the front door. Wet, grey days especially.

This morning, out walking on the light dusting of snow, I noticed boot prints with ‘claws’ extending out in front of the boot! A new kind of traction device for icy conditions I suspect. There were also the unmistakable signs of Yaktrax, a traction device I used in Edmonton during winter snows. But what about the car tyre tracks? Every track tells a story and clearly here was a car that lost traction and had to turn back. With some danger and difficulty.

Thinking about it we were originally designed to be on all fours. Now walking on our hind legs and traveling on round wheels we can easily run into serious trouble! We humans have of course adapted physically and mentally and for the most part can stay upright and moving forward. Most of the time anyway. And if we are using good tyres in good condition the vehicle we are in will gain traction. Most of the time anyway. Shoe traction devices are wonderful by the way.

But what about gaining traction metaphorically speaking. For the most part it almost always has something to do with acceptance, in the end. Although of course the exact meaning of gaining traction depends on the context in which the expression is used. The opposite or complimentary expression would be spinning ones wheels! When you spin your wheels, you are doing everything you can in terms of effort, but you are getting nowhere, like the car on the hill. When you gain traction, your effort is finally getting you somewhere. There are some interesting Preceptual matters going on behind these thoughts.

Did you ever feel you were getting nowhere, inter-personally, socially, politically and spiritually even? Gaining traction, being heard/understood/appreciated etc., is what one hopes for, using reason and logic, kindness for both self and others. And anything else at ones disposal. But just sometimes you know that the wheels, metaphorically speaking, have no traction. The ground is very very slippery. You know you are getting nowhere. What to do? Like the car on the slippery hill one option is to turn around and take a different route. Or retreat until conditions change and are more favorable. Increasingly, when it is practically possible, I find that stepping aside (pulling over into a lay-by) for a longer or shorter time is very effective. But not a universally wise way to go.

Just one last thought. Trying to gain traction can lead to spinning ones wheels, in a rather destructive way both emotionally and spiritually. How so? In a million ways, in every day, we are exerting influence on conditions. We are after all active agents in the flow of change. If the background intention of our interactions is towards following the Precepts, the potential harm is at best minimized. The Three Pure Precepts are 1)cease from harmful habitual action, 2) do that which is good (beyond the opposites and good/bad) and 3) do (or be) good for others. But what about the elephant in the corner?