Well! I remarked to the young chap behind the counter, It’s one thing to buy postcards, and quite another to write and send them. He said in all seriousness, It’s good to keep up the epistolary arts. I said, The what!? So kindly he explained. Wrote down what it meant on a piece of paper, and here I am doing what I said I’d do. Write. But the postcards are yet to have the epistolary arts applied. Tomorrow?

That’s Berkeley for you. Educated everybody. Especially on Telegraph Avenue, in Moe’s Books (which is where the above exchange took place. A huge bookstore close to the University of California Campus. Apparently with connections back to those turbulent times in Berkeley in the 1960’s. I know at least one reader who was there at the time….

Moe’s Books was founded in 1959 by Moe Moskowitz and his wife Barbara, the original site of the store was a small shop on Shattuck just north of University Avenue. As the early 60s dawned, Moe moved his expanding operation to Telegraph Avenue, closer in to the hub of the UC campus. By that time UC Berkeley was about to explode into the national limelight as the focal point of the burgeoning Free Speech Movement. As the decade lunged forward and the Viet Nam War raged on, Moe’s Books found itself at the center of numerous confrontations with the Berkeley police and the National Guard. When local authorities called for city-wide curfews, Moe refused to close his doors, asserting that people should be free to walk the streets. When an occasional tear gas canister would roll down the sidewalk, many protesters sought refuge in Moe’s Books–one of the few safe havens willing to remain open during a time fraught with imminent danger. Clearly this was a revolutionary period in our history that defied comparison, and Moe’s Books under the fearless leadership of Moe Moskowitz, led by shining example.

Epistolary means: Written in the form of or carried on by letters or correspondence. Who would have thought buying a few postcards would lead to such and interesting word, a charming encounter and a hugely historic bookshop.

That was not the half of our shopping trip by any means. Berkeley Hats just down Telegraph from Moe’s is a hat fanciers heaven. 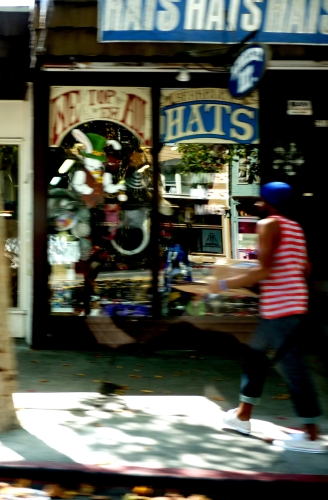 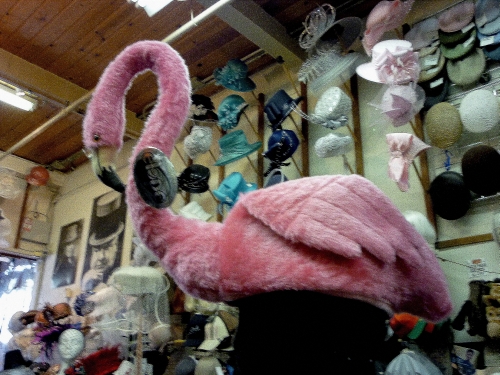 Now there’s a hat to write home about!

One thought on “Epistolary Art”