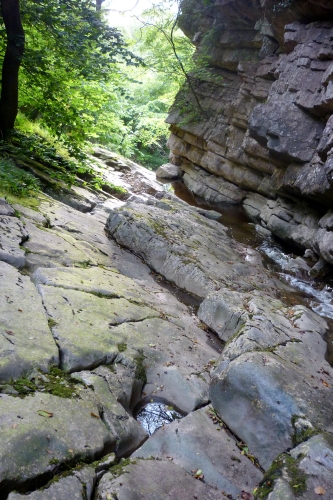 Ewbank Scar, a pleasant ramble.
We had already said the five thoughts and were tucking into lunch. Edera spoke, Rev. Mugo are you enligh…. I thought, Oh crikey! Pausing a moment she said, No, that’s not quite the way to put it. A wide ranging conversation ensued; enlightenment (sudden and gradual), staying alive, original enlightenment, why Dogen went to China, 12th century Japan, the difference in meaning between accepting and receiving. Ah, what a good conversation.

Later. Much later. Edera and I go over her today’s post on Little House. I tend to go by how written words sound when spoken. The music of speech, on the page. And the rhythm. That’s the rhythm of a sentence which is beaten out by commas sprinkled here and there. And I want to know about the proper use of colons and semi colons. she said. Oh they are about being able to list lots of thoughts one after the other, divided by commas, so you don’t need to make lots of sentences. I could almost hear Iain, wordsmith as he was, groaning or growling. But actually that’s not a bad explanation for a semi colon.

Much, much later we talk about the vital importance of commas, when to put them in and when not to. See here a joke about poor punctuation:

A panda walks into a café. He orders a sandwich, eats it, then draws a gun and proceeds to fire it at the other patrons.

‘Why?’ asks the confused, surviving waiter amidst the carnage, as the panda makes towards the exit. The panda produces a badly punctuated wildlife manual and tosses it over his shoulder.

The waiter turns to the relevant entry in the manual and, sure enough, finds an explanation. ‘Panda. Large black-and-white bear-like mammal, native to China. Eats, shoots and leaves.’

Less is best as far as commas are concerned. But I do like the way they add a da, DAH emphasis at the end of sentences. Let’s have more lunchtime conversations, please.