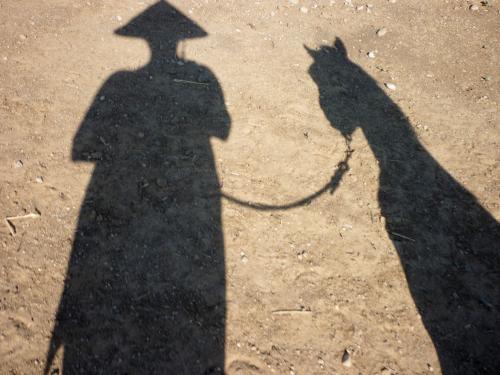 Sometimes with company, mostly alone and not on foot!
Yesterday, driving from Santa Cruz up past San Francisco and the East Bay to Meadow Vista above Sacramento I began to feel like the whole world is surfaced with tarmac (black top). There’s an incredibly complex system of freeways in this area of California where, at the very least, the freeways have three lanes, that makes six each way and a maximum of six lanes, adding up to a massive twelve lanes each way. Which all adds up to a lot of black ribbons snaking across the landscape.

And I drove and I drove, at around 70 mph, with cars side by side and one behind the other all driving at around 70 mph, or faster. When the traffic reporter says, the traffic is moving freely, this is what they mean! When it isn’t moving freely that’s when I am extra careful, and nervous. There is then much speeding and slowing down, cars switching lanes playing the odds on which lane will move next, and fastest. The danger of getting rear ended is huge, and the risk of not stopping quickly enough and running into the car ahead is ever present. Freeway driving for hours on end is a mental and physical work out. Tomorrow will probably be the last freeway trip I’ll be making on this journey.

Hope you like the photograph. It reminds me of happy times spent with Venus the horse at Pine Mountain Temple. I have known a lot of horses and ponies through my life. I find them exceptional communicators, mind to mind. And Venus was sweetly vocal with her whinny too. Heavenly horses.

7 thoughts on “Horse In Hand”