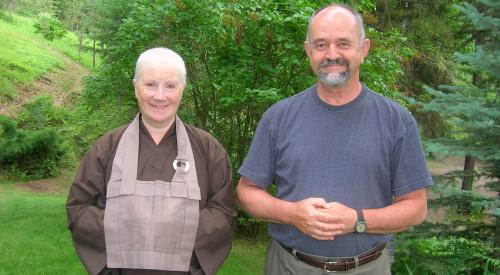 Helmut and Mugo in the garden in Idaho 4th July
Jade Mountains was started originally in 2003 and the first posting was written in the cabin where I’m staying at the moment. Earlier in 2003 I met Helmut, who I’ve know for quite a number of years, he greeted me saying, Hi Jade Mountain, good to see you! He knew about monks going by the name of their temple, which in turn is usually named after a nearby mountain.

Helmut’s greeting probably influenced me to choose the name Jade Mountains for my website, which is a reference back to my temple, as was, Jade Mountain Buddha Hall, a 35 foot trailer in Cornwall. The trailer needed a name and that’s what I came up with. Hover your cursor over the About tab at the top of this page and you will find a bit of website history. Incidentally, there are no mountains in Cornwall however there is St. Michael’s Mount near Penzance and I like to think that is the mountain linked to Jade Mountain Buddha Hall.

The young chap who has walked beside me during and after he transported all the Moving Mountains content into the original Jade Mountain sent an email with an update on site use statistics. I’ve nothing to compare them with however the numbers do seem to be getting larger over the months after the transition in early April.

I hope all is well. I thought you might be interested in an overview of the blog’s performance over the past few months:

This means that in June 2,079 people visited the site 5,950 times (a little more than twice each) and looked at a total of 44,124 pages. The trend is consistently upward which means the technical bits are doing their job in promoting the site…. Your total page views for 2008 are around 120,000.

Thanks John and it was good to chat on the telephone today. Perhaps there will be a chance to post a photograph of you and me while I’m in North America. Oh, and Happy Birthday on August 9th when you transition to being a young(ish) chap! As it happens that will be the day the overall winner of the Shed of the Year results will be published.

There is something to be said about the flow of cause and effect in connection with the development of this site and the people who have helped it happen. And have helped keep it going too.

Tonight as I sit on a deck overlooking a stream with the light dimming I’m going to leave it at that. Well except to say that none of us know the effects of our actions, we just wish them to be for the good. A good beyond paired opposites of good/bad, right/wrong. (The last sentence was added 14th July 2008 in order to clarify the meaning of my use of good in the previous sentence.)

Thank you one and all.