Senpukuji is a small country temple a few miles south west of the town of Tateyama. This is an area which feels a bit like Devon and Cornwall, certainly the small seaside towns of this southern part of Chiba Prefecture are still a popular holiday destination for people from Tokyo. Away from the coast it’s a very hilly place often covered with impenetrable hardwood forests which shelter troupes of wild monkeys.

This was Keido Chisan Koho Zenji’s first temple as ‘priest-in-charge’. He came here in 1906 when he was 27 years old. We were told at Fukuji-in that it was arranged because he had been suffering from pneumonia and the mild climate in this area was good for convalescence. So far we haven’t traced any information relating to the building itself but Koho Zenji was the sixteenth abbot so it must have been founded in the Edo era of Japanese history. It’s typical of thousands of small country temples across Japan and very like, although slightly bigger than, Rev. Master Jiyu?s temple, Umpuku-ji, at Hagino.

Senpukuji has not had a resident priest for several years and is looked after by a priest from Kokonoe about five miles away. The temple is still carefully cared for by villagers as is the graveyard on the hill above where there is a plain black memorial to Koho Zenji. Because it’s no longer on the active ‘official list’ tracking this temple down took some real ‘detective work’ and many phone calls (at least seven of them), and we nearly made the mistake of visiting a temple with the same name in nearby Kamogawa.
By Iain. 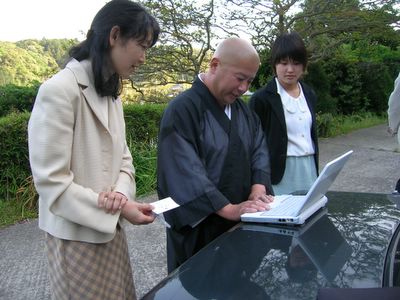 Rev. Kobayasi, the priest presently responsible for Senpuku-ji, spoke English well which was much appreciated. A number of years ago he visited North America and spent time in San Francisco Zen Center and branch temples in the Bay Area and also in Brazil where there is a large Japanese community. While in the Bay Area he helped Vietnam Veterans financially, this however was not met with universal approval by his colleges. I got the impression that his vocation and movement to compassionate action was strengthened through this experience in San Francisco. We initially met Rev. Kobayasi and his elderly, now retired, father in their home temple. Our arrival was timed well since a memorial feast had just finished and a number of adults and bouncy children were just leaving.

Here he is checking to see if there is a wireless connection so he can look at this Blogger. There wasn’t, however he will be checking into Moving Mountains blogger at his home temple. Sorry it has taken so long to get the pictures up Reverend. And thank you so much for taking us to the temple.

Just before leaving we were given a number of printed Japanese Buddhist books that had been waiting on a shelf for many years to find a good home. On behalf of the Order I accepted them and they will indeed have a good home within the Order. Thankyou.