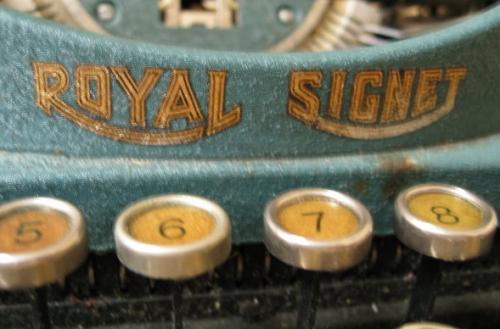 I am writing this on a 1942 Royal Signet portable typewriter. It has no exclamation point and has only upper case letters. It demands a firm stroke; and hesitation producing only a faint impression of your intentions. It is sturdy and obviously built before and notion of planned obsolescence. It sounds and smells like history.

My father bought this typewriter the year that it was manufactured, though I only remember it in brief moments of clarity in an otherwise vague childhood during the suburban 50’s. The machine recently came to me from the far reaches of a storage unit that my sister was cleaning as she prepared to move to another state. I believe that it has been about forty years since I
last pounded these keys.

Along with the typewriter, many boxes of photos and papers also showed up, including little love notes typed on this machine and left for my mother as my father headed off to the still mill in the Chicago of the 40’s.

The boxes also proved to contain a dissembled chronology of both sides of my family history. Folders full of trivia hid notes of clarifying significant events. Photos of unknown people having fun at a picnic provoked a visceral discomfort. Memories and narratives of my life began to stand on their heads and morph in endless iteration.

This disruption of the story of self continues. There’s a liquefaction of the ground on which I stand, like what happens to silty soil during an earthquake. This all sounds rather dramatic, but there really are only moments like that. Mostly it’s been about noticing the shifts in perspective and quietly waiting to see what’s going to show up next. Not forcing myself to dig deeper, not turning away from what’s there.

Every so often I come across a picture of myself at a younger time; peering into the picture like I’m trying to see through to the truth or gazing out-of-frame trying to look cool, or both. And I see now how much I missed wearing such earnest blinders. At the same time I notice that it’s all being offered again and again and that more of whatever IT is can be seen when viewed through the tatters of what I last held to be the real story.

In the midst of this unfolding, I especially appreciate this 1942 Royal Signet portable typewriter for its helpful qualities: that it requires such sensate – and anchoring – operation and for its ability to have waited for 40 years to again be of service.

One thought on “Let it Float”