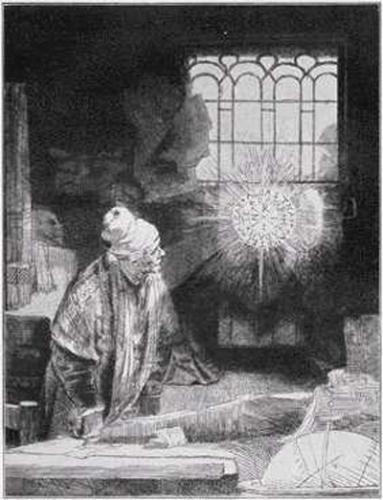 Nancy and I crunch our way down the gravel road on a late afternoon beach walk. A car rolls up, window down. Our neighbor Nancy, sister in name and mirth to my Nancy, tells us with a smile that her fourteen-year-old son, Jack, has given everything he has and everything he is to the devil. He’s made his pact with Lucifer and dies. It’s just a hard thing for a mother to witness even if it is a play. Neighbor Nancy is now in a hurry to bring Jack something to eat before he appears in the next Young Actor’s Guild’s performance of Dr. Faustus. Jack is Dr. Faustus. We really shouldn’t miss it.

As far as my Nancy and I are concerned, Jack is a local treasure. Actor, singer, raconteur, Jack is a member of a creative family that has brought laughter to the neighborhood. Jack has already helped us get reacquainted with Gilbert and Sullivan, so why not Christopher Marlowe?

Fast forward to the next evening: Nancy and I are sitting in the small theater of the Theater Arts building in the local university amidst the pre-show buzz and chatter. The man next to Nancy asks: Which child is yours? It’s a friendly crowd, here to witness and encourage.

Waiting to see Jack, I take in the stage setting. Angular, minimal, sharp contrasts between light and dark. As the play unfolds, a pattern of clever use of space and a smooth flow of complicated movements is established. Then there is Jack-as-Faustus: he acts with his whole body in a way that remains in harmony with his speech. And it’s a very physical part.

I also begin taking in the arc of the story. I came here because I appreciate Jack and Jack-as-Faustus, in turn, is bringing me back to the archetypal struggle between good and evil, right into the apparent separation between heaven and earth. That’s when I notice the scanner kicking in.

The scanner that I’m talking about here seems to lie below the surface of my self-awareness. I can’t describe it well, but it acts like a sort of software in my psyche that scans incoming data from all and any source. I can tell when it’s moved beyond an idle and is considering something more actively. This scanner seems to look for puzzle pieces, connections between things, perspectives that lead to wholeness; it has an inclination to look through to the Big Picture.

As Faustus begins his bargaining for fame and gain, my scanner highlights a phrase of what Faustus sees as one gain of making a deal with the devil: to be resolved of all ambiguities. Hmm-m-m, goes the scanner. And suddenly I become aware of an evolution in how I see ambiguity. It used to drive me crazy. It seems that this tension has fallen away for me somehow.

Hell, for me, is not an afterlife issue. I have a reputation with myself (and with Nancy and R.M. Mugo as well, I suppose) of moving in and out of hells on a regular basis. Hells of various depths and dimensions, from bristling to excruciating, come and go. And, likewise, heavens. I am trying, to the best of my ability in the moment, not to pursue or push away either. In that there is a contentment that reaches beyond both.

But there is a price, I find. Not a price that can be bargained for though, but a price that I have to live. Simply put: I must be willing to not know what is going to happen next. I’m not talking about paralysis here, this is not about fear. Well, it may, on occasion, require being with fear or insecurity but it’s not about being driven by fear or insecurity. Ambiguity has become for me an increase in possibility, a wider field of possible action. Life as one surprise after another, moment to moment to moment….

The scanner continues and notes a comment the servant demon Mephistopheles makes to Faustus: Hell has no limits, nor is circumscribed in one self place…. All places shall be hell that is not heaven. Hmm-m-m, again. Sure feels that way when I’m mired in a hell realm. But there’s something else here: assuming the imperative to pick between heaven or hell as fundamentally real just might squeeze out any sensing of what is eternal in the present moment.

How can poor Faustus escape this split? Well, he doesn’t. And now I am back watching Jack-as-Faustus splayed on the ground in his death scene. He cries out to God for salvation and dies. A crowd of black-robed figures moves slowly toward him, the lead figure holding the contract Faustus has with the devil. The lights dim just as she reaches the body.