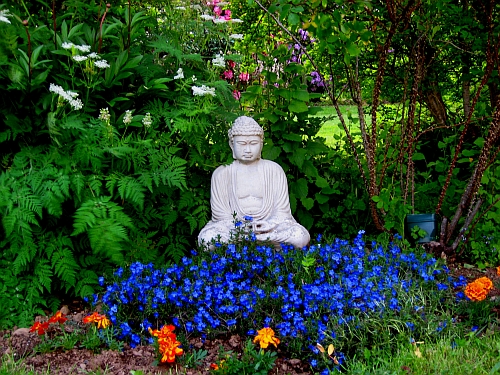 Garden Buddha – pointing to where we sit, benefiting self and other.
Viewed from my window. A lorry loaded with huge plastic pipes went up the road. Then later, down the road only to be followed by it coming back up the road. Lost! Yes probably lost and the roads are in no state to be in any doubt as to where one is going. People on foot. Booted and gloved with shopping bag or backpack. Many preferring to walk in the road rather than the uncleared pavements. All walking purposefully. Fetching and carrying or escorting children for play in the snow. The going underfoot is somewhat perilous for the young and fit, for those who are less young and less fit life is a struggle right now.

Last afternoon I fell into conversation with an older chap as we slush-ed our way along an uncleared side road. Him in his wellies, me in hiking boots. He had a walking pole. He recounted that he had already fallen and had gone back to fetch the pole to steady himself. Poles are in effect an extra limb to help with balance especially on ice and inclines. We parted with a wave. I mused to myself that these extreme conditions do bring people together. I found myself entering into more conversation as I went about my business. Getting in supplies while there was a break in the snow falling.

Being sure of foot goes largely unquestioned and thus unappreciated. It is after all more or less continuously. The occasional trip or slip gets ones attention, to pay more attention to the going under foot, which is good. Then there are the little slips which have big consequences. A broken limb! A sprained ankle! Mobility then becomes a BIG ISSUE. Then imagine a young man, on patrol, in the army, stepping on a trip wire. The story of one such chap, now a triple amputee, has been told on a BBC3 Documentary titled My Boyfriend the War Hero. It can be downloaded or watched on line for the next 13 days on BBC iPlayer. The story centers around the relationship between the chap and his sixteen year old fiance who becomes his full time carer. People who have amputations tend not to lament their loss, they are focused on mobility and all the huge challenges presented. They have had time to make their decision and come to terms with it. However for our soldier in the documentary there was no time, just a bright white flash as he took the hit.

Mobility compromised is a gross understatement and not the whole picture by any means. This post is for all those who take the hit like this soldier, or in the other multitudinous ways people are hit in life. Largely such extremity is hidden to all save those who care for them. One can only imagine the chronic isolation and loneliness for all who suffer a hit, as well as the stresses and strains encountered by those around them. A thought.

Unlike our little bitty fall of snow, fetching strangers to converse in a picture postcard world, the raw reality of amputation is not a pretty sight. However I believe it is important to allow the sight and reality to enter in. For the benefit of others as well as oneself.