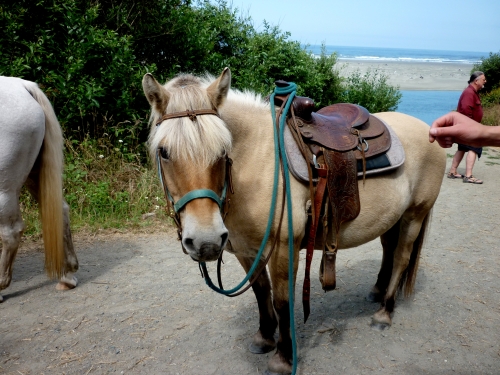 A Norwegian Fjord pony, pausing after a ride beside the Mad River.

A few days ago I had a lift (ride) up the coast from the Bay Area with a person doing his PhD at UC Berkeley, in Old Norse. We had hardly crossed into Marin County before my transportation benefactor was regaling me with stories. Old Norse Sagas. His enthusiasm was infectious, I was quickly spell bound. I began to see how these stories, depicted in such monuments as the Gosforth Cross in Cumbria, England and others in the Isle of Man are ways of making sense of the world. Rather graphic ways which I can connect to.
And the pony?:

The Fjord Pony’s ancestors were used by the Vikings as their primary mount. Therefore, it may be assumed that it affected the breeds indigenous to other countries, notably the “mountain and moorland” ponies of Great Britain, and the Icelandic Horse.
From Cowboy Frank’s site.

This is for my traveling benefactor of four days ago. Thank you.