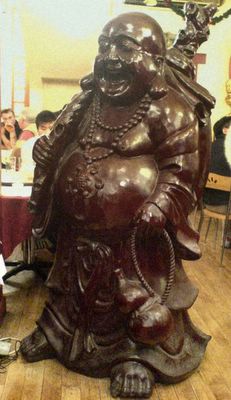 The winds in this part of the country were so strong many of the New Year civic celebrations were cancelled. Not so many fireworks out there and not so many casualties to deal with in the Accident and Emergency Departments in the North of England either.

We welcomed in the New Year with a ceremony, one of my favorites, with the wind and rain lashing against the windows as we sat in meditation during the evening before the ceremony. Brrr! Over in Newcastle a reader and his friends went out for a meal in China town where this Hotei was found. Hotei is very prominent in Chinese Buddhist temples and is regarded as being the Bodhisattva Maitreya.

For years we celebrated the festival for Maitreya, the Buddha to come, on the first day of the year. Now since my teachers death we remember her as it was her birthday. It was my mothers too, she would have been 99 this year. I thought they would live for ever. And in certain way I was right!