How many times have I walked into a music shop and asked for an f tuning fork only to be met with kindness, to be sure, but no promises of an f fork? It would seem they are not used much and so for years my efforts have been in vein. That is until the other week when I strolled into a music shop, in the now famed, Whyte Avenue close to the Priory. The sales woman, Lisa, went to a lot of trouble to track down a source for me and the other day I picked up this one. A magnificent aluminum tuning fork, it’s a whopper too. 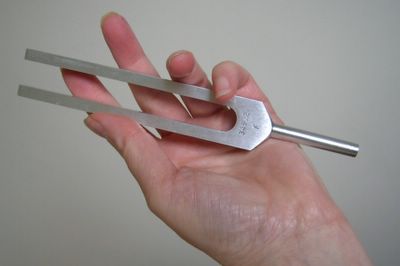 Our scriptures were translated into English and set to Gregorian chant by Rev. Master Jiyu-Kennett and much of what we sing has a ‘reciting note’ of f, thus the need for the fork. It is paramount to start off a scripture on the right note as things can go down hill, musically, very fast if you don’t. When I’m precenting I prefer to use a tuning fork rather than a pitch pipe as a pipe, powered by breath, can sound a bit odd ‘honking’ in the middle of a ceremony!

In an interview Rev. Master gave with Lenore Friedman she spoke about translating the scriptures and setting them to Gregorian chant. Which is a variety of plainsong by the way, something I’m glad to have got clear for myself. That interview, along with interviews with other leading female Buddhist teachers in North America, were edited into a book entitled ‘Meetings With Remarkable Women’ published by Shambhala. It came out in the 1980’s and has since been republished in a Revised and Updated Edition around 2000. It’s well worth getting hold of a copy as, apart from the references to music, the interview give a sense of Rev. Masters’ humanity and great sense of humour too. Also Lenore paints a picture of training at Shasta Abbey, as seen through her eyes during a weekend stay there.

Here is an extract from the aforementioned interview for your interest:
“…there are twenty-four scales in Gregorian—and there are peregrinating ones as well. Which means if you choose the right ones, you can avoid the emotionalism. Interestingly enough, regarding our major and minor scales, the major is one of the twenty-four, which is the war scale. All our major music is written in the scale that encourages anger and violence. And all our minor music (which is the Aeolian) is the death scale, in which people made all their funeral music.” “I do most of mine in the Phrygian, which is very cool and starry and still. And it gives the perfect effect. I also use the peregrinus mode because that’s extraordinarily good for very long lines.”
From
Meetings With Remarkable Women, published by Shambhala.

Well, this has all been very instructive. I expect there are readers who know a lot more about plainsong, and music generally, than I do. I’m no expert. If anybody needs to get a copy of our Scriptures and Ceremonies you can buy a CD, or an audiotape version, from the Throssel Hole Buddhist Bookshop. They may well ship to North America.

One thought on “Reciting on F”