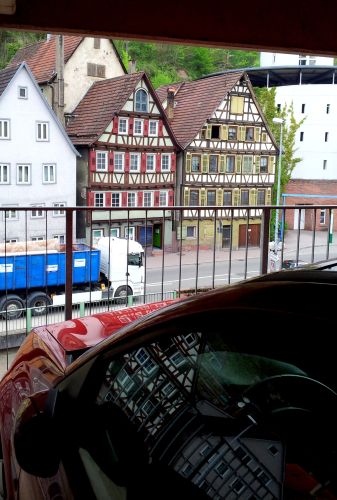 In a car park, Calw Black Forest. Calw is the birthplace of Hermann Hesse.
Since my last entry I have traveled! (Southern Germany to North West England, with an over night stops in The Netherlands and Northumberland). AND A dead hard drive brought back to life. (Who said the professionals know everything!) A couple of days rest and recovery. Several loads of laundry. Several hours trying to fathom knitting pattern instructions….(photo of garment to follow.)

Yes, I am recovered enough to sit and type this. I am inspired by the comment asking if my return to England meant I stopped writing posts! No, the posts must go on. Ideally I like to write every day and if not that every other day.

” . . . it is not for me to pass judgment on those prisoners who put their own people above everyone else. Who can throw a stone at a man who favors his friends under circumstances when, sooner or later, it is a question of life or death? No man should judge unless he asks himself in absolute honesty whether in a similar situation he might not have done the same.” p. 68.

A moment to ponder I think.