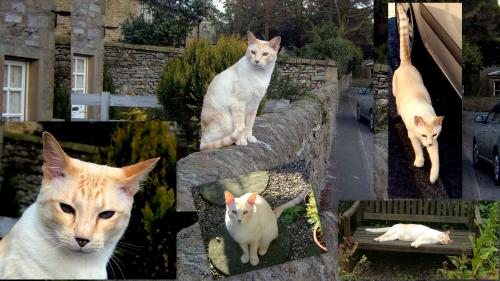 I just heard that Matty died this morning. The following was published April 2011 giving background on this lovely sensitive cat. Matty was two weeks short of his 16th birthday. For the record Orlando, mentioned below, went missing from his home across the road on November 5th last year and never seen again.

As the proud companion & carer of a former Temple Cat from Reading Priory, one Matthew (Matty) Cat, aka as MC, I welcome Orlando to the (possible) status of Jade Mountains Temple Cat – perhaps. The Prior at Reading at that time was reluctant to take MC on as she knew she was away a lot. Being Siamese he attached strongly to one person & each time the prior went away he got more & more upset. Eventually he was shut in the utility room as he had wee’d in other rooms in the Temple!

One time the prior knew she would be away for several months. I had a vacancy in my household & heart for a cat & had been waiting for one to show up. I always remember the joy of having Matthew at first – it was like me & the dog became a family when he arrived to join us. He was fostered at first but everyone decided he should stay. He was a teenager then, now he’s 13 & still as handsome as ever. It is the only time I have experienced love at first sight when I first met him.

We grow close to our animal companions and their loss is felt no less keenly than the loss of human friends and companions. This post is for Matty and for Angie.