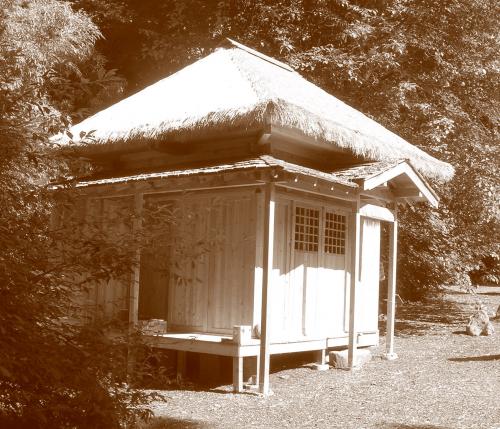 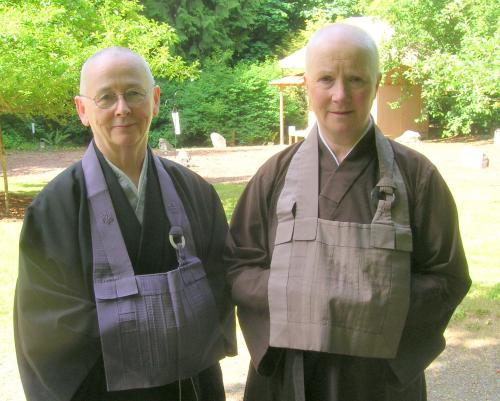 Zen Master Aido and Mugo with Gogo-an in the background

This is amazing! While publishing the poem and photographs last week Aidosan was leading a retreat at Shasta Abbey. Her spiritual linage comes directly through Zen Master Ryokan and much of her teaching is based on what has been passed on through his poems. Since I was relatively near to her temple near Olympia Washington I decided to go and visit her. By good fortune she was there and I was able to join her there and make it an over night stay.

We walked, we talked, we laughed, we shared meals and we sat and we sang scriptures. And everybody chanted, except me. I never did learn the scriptures in Japanese and that’s how they are sung here at this wonderful temple dedicated to Zen Master Ryokan. Aidosan is a direct spiritual descent of Ryokan, the only female decedent and the only Westerner. She did her monastic training in Japan in much the same way Rev. Master Jiyu did. That’s in an all male training temple and by all accounts it was tough going.

Aidosan had just returned from Shasta Abbey having lead a week retreat there which focused on the teachings of Zen Master Ryokan. I was told by one of our monks that it was a retreat unlike anything we have done here before. Since I was in Washington with some wiggle room in my schedule I asked if I could visit. Come! The door is always open.

It is not be possible to convey the deep impression this temple and it’s grounds made on me in during the brief time I was there. Rarely do I sit down on the ground with a cup of tea, which I did the afternoon I arrived, and then find much time has passed without my being aware of it. Tea mug empty and the sun falling down behind the replica of Ryokan’s hut. I’ve made a mental note to return and stay in the hut for a few days. Is this some kind of romance? Nope I don’t think so.

Much has happened on this piece of land and a huge amount of spiritual and practical energy has been invested in it. Now the place offers it back ten fold. Here is an extract from Olympia Zen Center News letter dated April 2008.

It has become the custom in the US in Soto Zen to make good use of existing building for the practice of Zazen. In our case, the home we found was inhabited by young men who had created a drug house. The neighborhood people were in fear of their lives as cars drove up and down the street all hours of the day and night coming in to purchase illegal drugs. Our offer to buy this house and change the situation became a gift and a light to the surrounding community and to ourselves.

Slowly and consistently we have transformed the landscape and the atmosphere. The Path of the Ancestors deepens with each season, and it encircles our Zendo with the spirit of our teachers. It is a natural unfolding of the light of practice. In walking the path, we confirm and authenticate the vow to realize practice in this time and place and to root it here for those who come afterwards.

During a break in the action I picked up a scripture book used in this temple. I gazed at the chants and took in the English translations as best I could without benefit of reading glasses. Ah yes, and here is the ancestral line which is the same as ours up to a certain point and then the names are unfamiliar where Roykan and his descendants come in. But what is this? Turning to the back page I find another list of names. The Matriarchal line? In honor of all those females who, from the time of the Buddha, have passed on the teaching this list exists. And at the very end is…Rev. Master Jiyu-Kennett.