This afternoon while driving between Manchester and Telford (avoiding very slow moving traffic on the M6) I became lost on the Cheshire Plain – all the while listening to Gardeners Question Time on Radio 4. Could the panel suggest suitable plants for the handlebar basket of my electric bicycle? Really!? One is never completely lost with Radio 4 aboard, never bored either!

Signs for places, towns and villages flashed by, most were unfamiliar to me. A brown place-of-interest sign caught my eye. Secret Bunker. Hack Green Secret Nuclear Bunker. Below are excerpts from declassified files concerning England’s, somewhat worrying, preparations in case of a Nuclear Attack. Read, laugh and cry. There is more on the website. 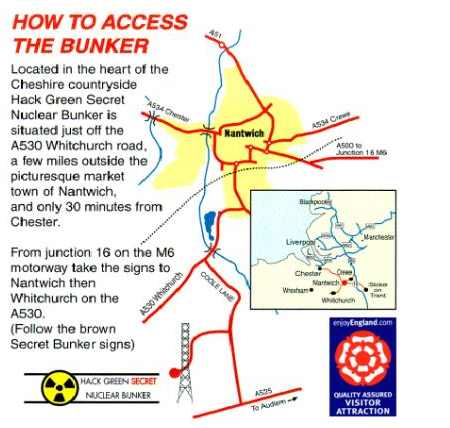 Meat-on-the-Hoof.
The flesh of cattle, poultry, sheep, pigs ect will be safe to eat provided the animals are slaughtered before they become sick with radiation sickness.

Potatoes.
For a meal consisting of meat & vegetables about 2cwt of potatoes would need to be peeled for 400 meals. (1 ton for 4000 meals) Allowing for wastage, which varies according to the type of potato and the season, this provides about a 6oz portion per person. It is estimated that the time taken for four people to peel 1 cwt of average quality potatoes is about 1 hour

Protective Measures.
Suitable clothing for use in a fallout area includes: Well clothed denim overalls. Gumboots or strong leather boots. Strong plastic or fabric gloves to prevent direct ingress of radioactive material into the body. “Scarf” or sweat rags around the neck to stop radioactive dust getting in. If no respirator is available a simple lint or “smog” face mask (a handkerchief over the nose & mouth could be used in an emergency) A closely fitting helmet or hat such as a beret, which will keep radioactive dust out of the hair, since the head is more difficult to de-contaminate than the rest of the body.

I’ll be at Telford Priory until the 21st February, then returning to Throssel where hopefully all the snow will have melted and spring will be in evidence.