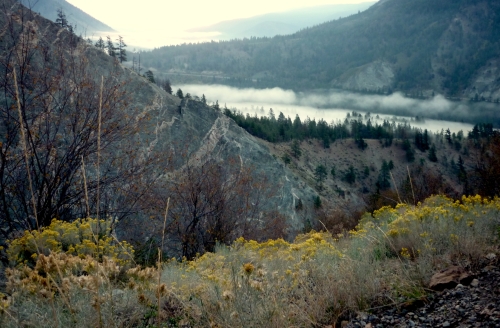 Taken from Botanie Creek Road, near Lytton BC
Lytton to Edmonton by car – 12 hours driving, at least.

View Larger Map
As dawn was breaking we were waved off by animals and a monk, golden autumn leaves carpeted the twisting graveled trail out to Botanie Creek Road. But moments after we launched we stopped. A rock in the road. My traveling companion inspected the rock and, climbing back into the drivers seat, muttered something about it being granite and easy. Another rock later on was not so easy. Not every day one travels with an explosives expert! Thus started a day of education. Not only, and briefly, on blowing up rocks but also local geology, trains and railways, road construction and much more. Enthralling to say the least.

So what might remain as a blur of roads and trees, trucks, cars and rest stops turned into…an education. Several times we stopped on our way through the Rockies to pick up rocks for show and tell at a class for children my friend is giving. Lucky children to be meeting a Harold of this world who will inspire them, as I have been inspired, to know the land we live in.

It was a long day and a good one, with a welcoming home at the end. Thank you to all.