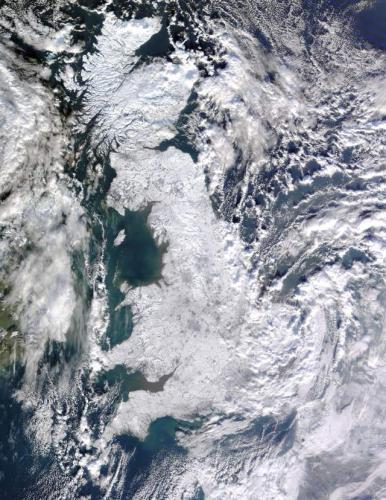 Snow blanketed Great Britain on January 7, 2010, as the Moderate Resolution Imaging Spectroradiometer (MODIS) on NASA’s Terra satellite passed overhead and captured this image. Snow covers most of England, from the east to the west coast. (The large image shows snow cover over the entire island of Great Britain.) The cities of Manchester, Birmingham, and London form ghostly gray shapes against the white land surface. Immediately east of London, clouds swirl over the island, casting blue-gray shadows toward the north.
NASSA Earth Observatory

Back in January I was in Kirkby Stephen, Cumbria and right in the midst of frigid snow covered Britain. I remember seeing this image on the TV at the guest house where I was lodging and being incredulous. I’ve posted it now for the record. And when I am blazing hot in the Southern California sun in August I might just take a look at this image to remind me what cold feels like. Cold!

Thanks to Walter at Evolving Space for posting the Nasa photograph and link. Nice photographs too, of flowers.