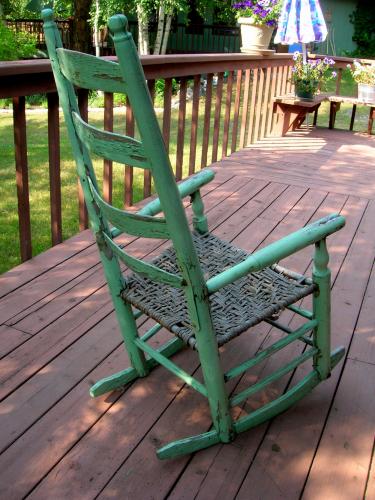 Rocking chair on a deck in Whitefish, Montana. 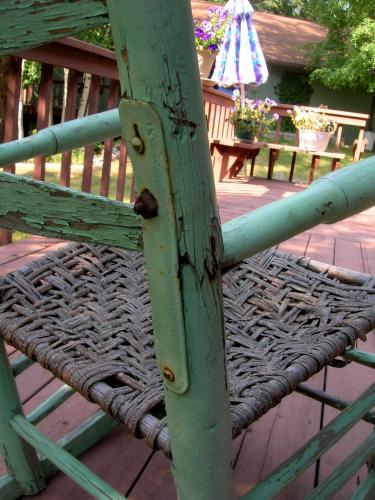 Detail of a mend.

This chair is special. The woman who enjoys it’s support has asked that it go to a museum when she no longer has use for it. She’s the other side of 80 and still going strong so it will be awhile before the rocker leaves it’s place on her deck.

When the ’49ers were coming out West on the Oregon Trail, and those who came after them, they would sometimes have to abandon the furniture along the way. Lighten the load perhaps or perhaps they just had to continue on foot with what they could carry. So people gleaned the abandoned and broken furniture and made, furniture. That’s the history of this rocker.

This afternoon, flying high over the Oregon Trail on my way south to the Bay Area, I paused for a moment to remember those who settled the west, the hardship and their endurance. And I also took a moment to remember with fondness the woman and her daughter on whose deck the chair rests. The chair gathered up from Oregon Trail. See! This is an old table leg.

I don’t want to go on about the good-old bad-old days, to cover them with a nostalgic glow. Those times were tough and life was probably gruesome in the extreme, and people did lots they had to do. There are people alive now who have made a huge contribution, as they did, who have given their lives in the service of others. They have know real hardship, and joy, and once again I honour them. Like the chair they may be getting a bit fragile but it does not seem to stop them rocking!

But that we can emulate the oldies pluck.