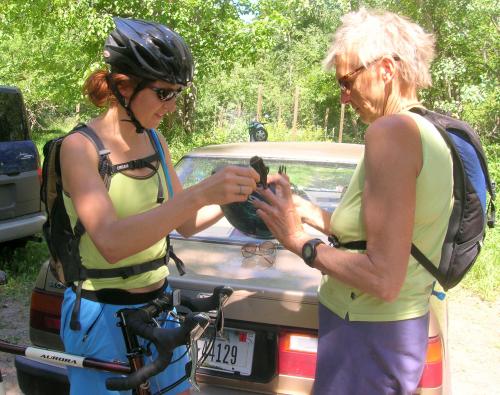 Mother and daughter combo readying for a training ride.

This summer, five cyclists with a shared commitment to creating a sustainable future and extensive wilderness will bike from the southern border of the Yukon Territory in Canada 2,000 miles to Yellowstone National Park in the United States to raise awareness of the Yellowstone to Yukon project (Y2Y).
Quoted from Ride for the Wild – Bearing Witness

I’m drawing attention to this long distance bicycle ride for a number of reasons. Perhaps the main one is I know several of the riders, including the two pictured here, and many of them are practicing Buddhists within our Order. The cyclist’s route takes them through some of the most beautiful country on the planet. My correspondent would know this personally since she grew up in northern Canada where the group start out from in mid August.

While the young woman, the daughter, was here in Whitefish over the week-end we talked about the ride; about safety issues, the reasons for participating, the practicalities and the inevitable vulnerabilities. Six weeks on the road will be a test for all the participants. Several people, including the mum seen above, will join the group at various stages of the trip. I wish them well and will follow their progress.

As far as I am concerned, in terms Buddhist practice, there is just the doing that which is good and following through in a reflective and intelligent fashion. This small band have a mission and a project which they consider good to do. Go for it! Engage fully, and take every safety precaution you can.

One thought on “Engaged Action”