This article was first posted on 18th September 2003. 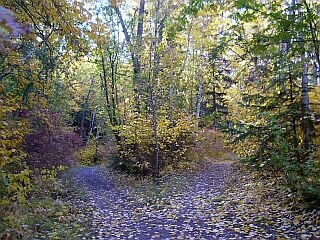 While out shopping this summer I found myself leafing through a rack of posters and my eyes alighted on the Robert Frost poem, ‘The Road Not Taken’. On-line I found a sermon by a Unitarian Minister in New Hampshire, where Robert Frost lived. He pointed out that Far from being a hymn to rugged individualism, this poem is a gentle satire on indecisiveness, the distortion of retrospection, and the seduction of self-justification. That’s why the poem is titled not The Road Less Traveled, but The Road Not Taken – for there will always be a road not taken, and we will never know where, for worse or for better, it might have led.

Here’s a critique of the poem which covers the points made in the sermon and expands on the method Frost took which backfired, turning the poem from his intended purpose to what the poem has become popularly known for. A source of inspiration!

According to the above minister, in 1953 Robert Frost was reflecting upon The Road Not Taken, and said the following, I wasn’t thinking about myself there, but about a friend who had gone off to war, a person who, whichever road he went, would be sorry he didn’t go the other. He was hard on himself that way.

The Road Not Taken
Robert Frost

Two roads diverged in a yellow wood
And sorry I could not travel both
And be one traveler, long I stood
And looked down one as far as I could
To where it bent in the undergrowth

Then took the other as just as fair
And having perhaps the better claim
Because it was grassy and wanted wear
Though as for that, the passing there
Had worn them really about the same

And both that morning equally lay
In leaves no step had trodden black
Oh, I kept the first for another day!
Yet, knowing how way leads onto way
I doubted if I should ever come back

When I came across the poem I was thinking of a friend who was hovering at a crossroad in her life. Now she has made her decision and, like Robert Frost’s friend, I hope she will not be too hard on herself with regards to the path she has chosen.

4 thoughts on “The Road Not Taken”