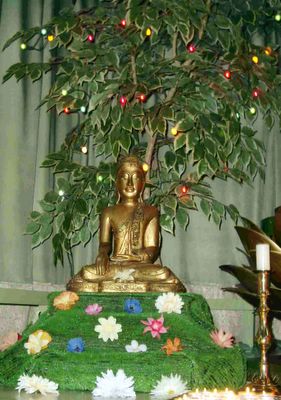 The Buddha sitting under a tree. This is part of the main altar set-up for the Buddha’s Enlightenment Day Festival at Throssel Hole Buddhist Abbey. Nice job Reverend Sacristan.

Photo by Billy Barnett, very many thinks for letting me use this.

At the end of the ceremony we had the customary offering of merit, called the offertory, which was sung most beautifully by one of the female monks. Here is part of it:

When Shakyamuni died, He told His followers to make His teaching the light of their lives and to make their own lives shine as brilliantly as the sun; the light of Shakyamuni and His followers has shone through many centuries and has been transmitted to countless people. We must follow in the footsteps of those who have gone before us so that our own light shall shine in the same way, and we must transmit it, even as they did, so that it may shine brightly in countless worlds and for thousands of lives to come.

Somebody wrote me today asking, When should one consider oneself a Buddhist? When one formally accepts the precepts? To truly take refuge in Buddha, Dharma and Sangha is to consider oneself a Buddhist. This is a private promise that one makes daily, with the intention to make the Three Refuges, and the ten Precepts, the light of your life. To appreciate what that actually means in practice is not a simple matter. Accepting the Precepts formally goes some way towards appreciating what the light of ones life actually is.

Anybody can make their own lives shine as brilliantly as the sun, in a religious sense. A spiritual path can be invaluable.