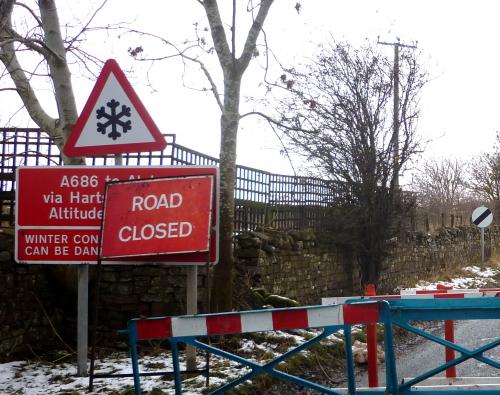 Approach from the West….
This morning, climbing up from the East towards Hartside Top. Snow. Gradually more snow. Oh crikey! Thick snow. But not a thought, as far as I can remember, of turning back. Just two wheel track dents in snow, blowing across the road. Plowing on regardless. A kind of madness? Thankfully when I finally did grind to a halt by the lonely summit cafe there were men pushing a sliding-spinning car.

It’s all a bit of a blur now. All cold hands and slush under the wheel arches. Fitting Autosocks for the first time. Bit of a struggle. Men clearly unimpressed with sock activity. Impatient to push me out of the road to let others past. (Was that Rail Track they had written on their jackets?!) Me determined to fit those socks. They disappear into the blowing snow. Then hurried shouted exchanges with other drivers. Go back? Go on? Men return to get the car moving. I’m in my robes. Soaked. Are you going on? a chap shouted. Yes. I shouted back. We’ll follow you then.

For those who know this road the snow drifts just after the summit and then after the first sharp bend, not so much. As I took off the socks, having reached tarmac, the car following me stopped to check if I was OK. The lad in the back, headphones still in place, rolled down his window. Awesome! he exclaimed. I’d like to think he was appreciating my driving skills. The back end of the car shimmied back and forth in the loose churned up snow calling for a steady hand and calm nerve. But it was probably the socks! They were indeed awesome.

Just before Melmerby the barrier across the road announced that the crossing was closed! In The Village Bakery, tea, scone and jam with a chance to come down from this minor adventure. Had a memorable conversation with a couple at the cafe who had made the crossing too. Thanks for being there. And listening.

7 thoughts on “Autosocks To The Rescue”