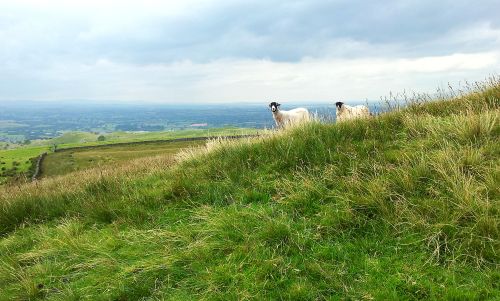 Sheep over the Eden Valley – summer.
We in Britain, and most likely everywhere in the world, are engaged with this huge event, the Olympic Games. I happened to catch the end of the women’s hockey match where Argentina won, and Britain lost. Directly after the match many of the British women were sobbing openly. Right there on the pitch. They were hugely disappointed and they showed it. Initially I was mildly shocked at witnessing this public outpouring of emotion. I’ve since grown to appreciate what I and millions of others saw. We have seen this showing of emotion at other events too. It’s honest.

Clouds over Shropshire fields – viewed from the Wrekin
How life in general, in the living of it, is punctuated with disappointments! And, unlike the Olympian hopefuls, one often doesn’t know ahead of time what they might be. Perhaps we don’t know how much we feel a certain way about something, or event, until things go a certain way or words are spoken. And then wham, those feelings of disappointment wash over and through body and mind. That’s painful when emotions run high, or low, depending on ones disposition. The only response I know that doesn’t lead to greater disappointments is to…stay with it. To have compassion for oneself, and for others and their actions and words which triggered the upset. Blame is NOT the name of the game.

The photographs take from high up, relatively speaking, are for uplift. For those known and unknown who are in extremity in all the way one can fall into such circumstances.

2 thoughts on “Blame Is Not The Name Of The Game”