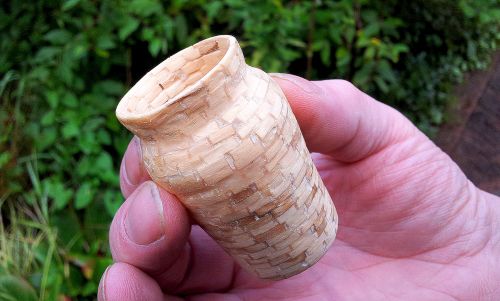 Matchstick vase
Quite an eye opener to see what can be achieved with matchsticks and glue + dollops of patience and perseverance. This vase is one of a pair which is part of a mini altar set up. One can’t help but bow to the skill and stick-with-it drive that has people building these most amazing models. And make Buddha heads too! Amazing!

We applaud people with stick ability. The Olympic athletes, men with matchsticks (women too no doubt). This level of passion and drive is something else isn’t it. For example how about the chap in Southampton who spent 15 years making a replica of the Brent Bravo oil rig, attempting to get into the record books for the number of matches he had used. Unbelievable!

Nagging in the background though is the question – WHY? I ask this question mostly because I don’t seem to be made of the stuff of stick ability to something. Not in the way of devoting time and energy to a project sustained over time like these matchstick models. Building those huge and complex models out of matches takes commitment.

In this post on Field of Merit I pondered this whole matter of making manifest ones visions. The question of commitment, to stick with it after the initial enthusiasm and drive has faded, is interesting. As with sports training or model making so too with the day-in-day-out perseverance needed to manifest ones vision – there has to be something deeply satisfying in just the doing of it.

A round of applause for human endeavours. A pause to reflect on Precepts.

One thought on “Passionate About – Living”