Nine years ago to-day my father died. Here is an extract from a posting written in 2005 while I was travelling past the site of his death.

…now on my return journey to Cornwall in what is called the West Country, the train passes through Taunton in Somerset. It is a special place of remembrance since my father died on the platform just before he was due to meet me off a train in January 2000. At that time, as my trained pulled out of the station, I was silent witness to a touching scene. I observed from across several tracks the paramedics arrive and attempt to revive a gentleman, unknown to me at the time. Considering the odds of being present at the time of my father’s death I am always so grateful for what happened in Taunton since I was able to be there for him. Present at the time of his death, even though I didn’t realize it at the time! I was also conveniently placed to attend to all that follows the death, identifying the body followed by funeral arrangements.

Each time I pass through Taunton on the train, as I have just done, I remember my father with great gratitude. I also remember with a smile, at the circumstances of his death, he would have smiled too!

29th January is always a special day of rememberence for me and as it happened we had a rather memorable menu posted to day, all in French. A bit of fun, and wonderful food too. 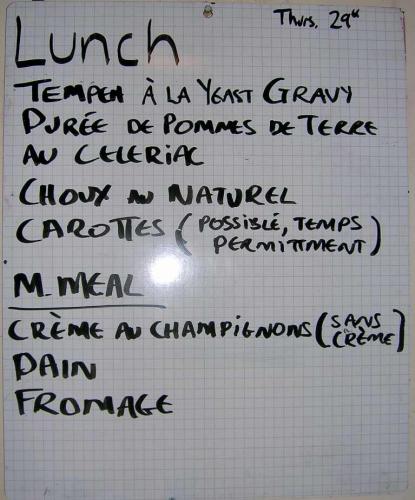 Thanks and happy birthday to to-day’s cook.

One thought on “A Day To Remember”