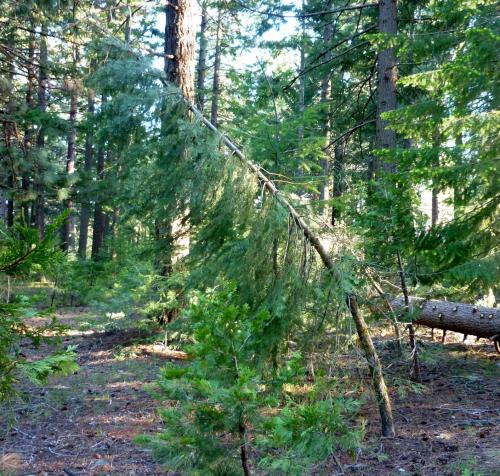 January’s Aftermath, 2010 Mount Shasta.
Trucks pass each other on the street
Small trailer trucks, their splintered side boards
bulging with their loads;
Massive construction vehicles with steel beds
easily contain whole tree trunks
protruding into view from behind the driver’s cabin-
all and each carrying away refuse
from a winter storm that snapped tree tops,
stripped branches from their mooring
sending them through roof tops
living rooms crushing rafters
cracking foundations
or just creating craters where they landed
in snow-covered earth with such silent force
that limbs stood up like wooden matches
until they loosed and fell.

An old woman, her body propped with two canes
walks down the middle of the street
then moves to the side, making space
for passing debris trucks. She walks haltingly,
calculating tree rings from felled oaks or
identifying cones from piles of pine.
She pauses, giving homage to tangled power lines
from downed poles, and to mutilated steel stacks
from crushed car ports, once sheltering
adventure vehicles for some other season.
The woman walks softly on beds of sawdust,
listens to humming chain saws,
creating mountains of firewood
from tall timber giants lying on the ground. 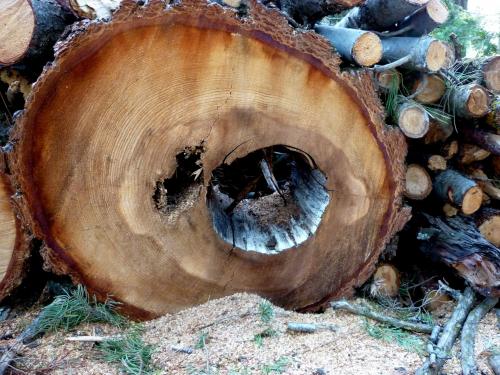 She stops at a corner; looking up, she studies
a centenarian oak. Its crown rises
above the nearest rooftop by three stories.
Splintered and broken, jagged branch stumps,
each big enough to form a single tree,
cling to the ancient trunk.
The old woman observes them, one by one:
They speak to her in some language without words,
a tongue she understands completely.
From the corner, she moves three steps
toward the East, to better see the trunk.
One side, ripped open, exposes
the tree’s heartwood core.
From outside bark to its center
the oak changes color, texture,
its light and dark reflecting
in the woman’s eyes. She knows
what it is to have a heart break open,
be exposed to storms,
to learn the sound of wind
entering a center.

There is something to be said
for gentleness.

Many thanks Anna. There is indeed something to be said for gentleness. Found in the midst.