Within our Order we have a Calendar for the Buddhist Year. January 1st is traditionally when we celebrate the Festival of Maitreya Bodhisattva. In China Hotei is honored in all the temples as Maitreya and there is a reason why too (that will be unveiled latter). Hotei was an historical tenth-century Chinese Zen monk called Budai. He is said to have wandered about and spent his time in villages streets rather than in the security of temples. Hotei’s name means “cloth bag” and he is usually depicted carrying a sack which is full of toys for children. I very much enjoy this warm hearted, joyous and playful depiction of Maitreya. 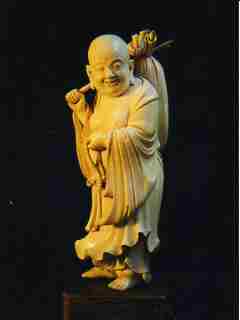 “It is said that just before he passed away Hotei recited a poem which expressed his regret that even though Maitreya sometimes appears in the world, he is unrecognized by people of the time. This led to the association of Hotei with Maitreya that has endured ever since.” Borrowed from Bodhisattva Archetypes

Of course we all carry the capacity to be the future Buddha…now!