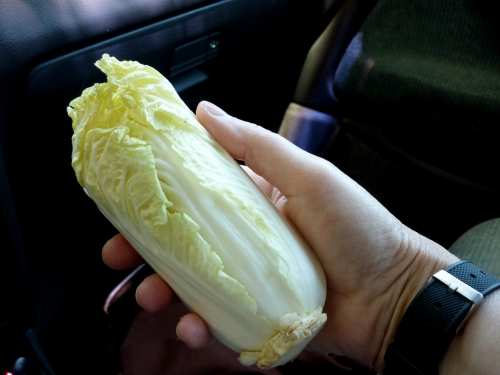 Travelin’ with Napa Cabbage
One last look over my shoulder at the past weeks. In particular a second look at the driving i.e. the hours of life in the car, alone. I don’t think I would have even attempted to make the journeys I have without the GPS navigation device (in Europe we call them SatNav’s for short). So a grand round of applause to that little friend I have had with me telling me such details as which lane to be in to how many miles until the next turn. I may have mentioned the corker announcement. Drive three….hundred…and….six….miles! That came early on during the trip from Sandpoint ID to Seattle WA. The voice from the machine becomes so familiar, and she became so much my friend and traveling companion, that I did at times come up with responses. In my head. The 306 miles announcement had me responding, Well! I’ll certainly be taking a break!

The voice carries an assuring authority which for the most part I obeyed. The one time I didn’t, on the way to Pine Mountain Temple, I had a happy hour or so cruising through the rural byways of the Central Valley of California. Was that cotton I saw growing? And olives, or some kind of nut?

Now. Out there in the middle of nowhere on a hot and dusty junction. Not a being in sight, no shade from a tree and definitely no bushes, there will come a STOP sign. In America, stop really does mean STOP. No rolling stops as they are called. You have to come to a recognizable dead halt no matter how obvious there is no traffic. And there will be no traffic for hours probably! Somebody once said to me, in fun, you never know if there is a cop hiding behind a bush waiting to book you if you do a rolling stop. So I always stop even when there’s no possibility of that sneaky policeman hovering behind a telephone pole waiting to pounce. We Buddhist keep the rules of the road. Period.

And so it is in daily life. Nothing we do is hidden. There are obviously no Precepts police to keep us in order but we cannot hide anything from ourselves. That’s no matter how much we might justify, or want to justify, our small and not so small transgressions. And as time goes on even as the hand reaches for the cookie jar, so to speak, one knows and stops because taking what is not given is taking stuff. And really that amounts to taking from oneself. There are however judgment calls we have to make be they while on the road or when going about ones day. However, wow betide the one who allows delusion to come to the aid of desire. The way it happens is that over time the small self-justified steps lead to bigger and bigger self-justified (delusional) ones and eventually STOP looses it’s meaning. Stop really does mean stop . Those Stop road signs in America have a real and deep meaning don’t they.

Wondering about the Napa Cabbage? On my last trip I happened to have this bundle of leaves with me and I can heartily recommend them as an easy and refreshing snack while driving. An excellent traveling companion…to eat!

One thought on “Stop Means STOP!”